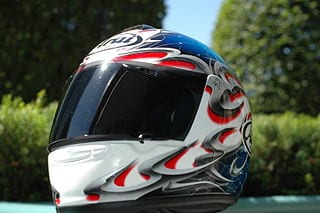 The Auto Cycle Union in the United Kingdom is a leader in motorcycle safety. The ACU actively strives for the highest standards and issues ratings for helmets based on its own research and testing.

Currently, the gold rating is the highest ACU confers. It signifies superior quality. Worldwide, many motorcycle racing governing agencies require all participants to use only ACU gold rated helmets in competition.

Recently, however, the ACU has come under fire for allegedly selling gold sticker approval to companies whose helmets did not meet the BSI type A standards previously required for a gold rating.

ACU receives royalty payments from companies for the use of the gold stickers on merchandise, and this system, in combination with the lowering of ACU gold standards to encompass previously inferior products, has produced grumbling among motorcycle enthusiasts worldwide.

In response to these allegations, the ACU has announced plans to institute a new rating standard. The new testing system will be a combination of all SNELL and ECE 22.05 standards currently employed in the testing of motorcycle helmets. Only helmets that pass both sets of tests will be awarded a five-star rating.

The ACU is currently working with the UK’s Department for Transport (DT) and Head Protection Evaluations (HPE) to develop the new rating system, which, it is hoped, will restore public faith in ACU. As of yet, no one knows what the new approval stickers will look like.

Many U.S. motorcyclists are content with DOT or SNELL approved gear since it is estimated that nearly 90% of fatal motorbike accident never exceed the DOT standards set forth by the U.S government. For the remaining 10%, ACU approved helmets are the only choice.

IF YOU, OR A LOVED ONE, HAVE BEEN SERIOUSLY INJURED IN A MOTORCYCLE ACCIDENT IN WASHINGTON – CALL TODAY FOR A FREE CONSULTATION!