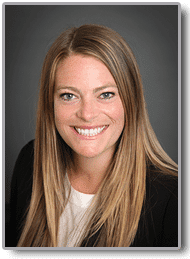 Meg was admitted to the Washington State Bar in 2012. Before graduating from law school, Meg worked as a Rule 9 Intern and found a passion for representing people who were facing large and powerful corporations and serving clients who had been injured by the failure of physicians, nurses, and hospitals.

Meg attended High School in Wapato, WA (near Yakima) and later received her Bachelor of Science degree in Bioengineering from the University of Washington.

Her background in Bioengineering, including research on the intersection of biology and medicine, provides her with a unique understanding of the priorities of big hospitals. She knows how the voice of a single patient can easily get lost or neglected.

During law school, Meg interned for Dore Deutscher Law Group and accepted an associate’s position there upon graduation. Over those five years, Meg gained significant discovery, motion, trial, and general complex litigation experience. She also clerked at the Washington State Office of the Attorney General, and worked throughout law school as a research assistant in the area of Race and the Law.

Meg began working at Bernard Law Group 2015, joining a group of attorneys that shared her deep commitment to representing her clients. They understand it can be confusing, frustrating, or downright belittling to deal with an insurance company, risk management department, or corporation on your own. That is why Meg has represented clients against Washington hospitals, Washington clinics, trucking companies, passenger car companies, bus transportation companies, and insurance companies. She is committed to representing her clients so that their rights are protected and works diligently to ensure that they receive fair and just compensation for their injuries.

So many times I have had clients tell me what an insurance adjuster communicated to them about the value of their case or the lack of severity of their injuries before they hired me as their attorney. This is usually a lie, told to this person to try to pressure an early settlement before they can hire an experienced attorney who will actually listen and fight for them.